Does Birth Month Affect The Odds of Getting the Flu?

Back in August, the Freakonomics podcast covered a topic that zapped me like I'd stuck my finger in a socket.

"After struggling to schedule a flu shot for his own toddler, host Bapu Jena went down a research rabbit hole. He discovered that the time of year kids are born has an unexpected and dramatic effect on whether they and their families end up getting the flu. Bapu explains his findings and asks a pediatrician and public health expert what could be done about it."

What?!  It's like they were talking directly to me, I felt attacked.  How did they figure this out before we did?

You know how I react to hypotheses like this - I don't believe it until I see it.  I needed to put the data together for myself.  I quickly reviewed "Birth Month and Influenza Vaccination in Children," a paper authored by three Harvard physicians which clearly shows a pattern of higher rates of flu infection for kids born in the spring and summer.  Check it out: 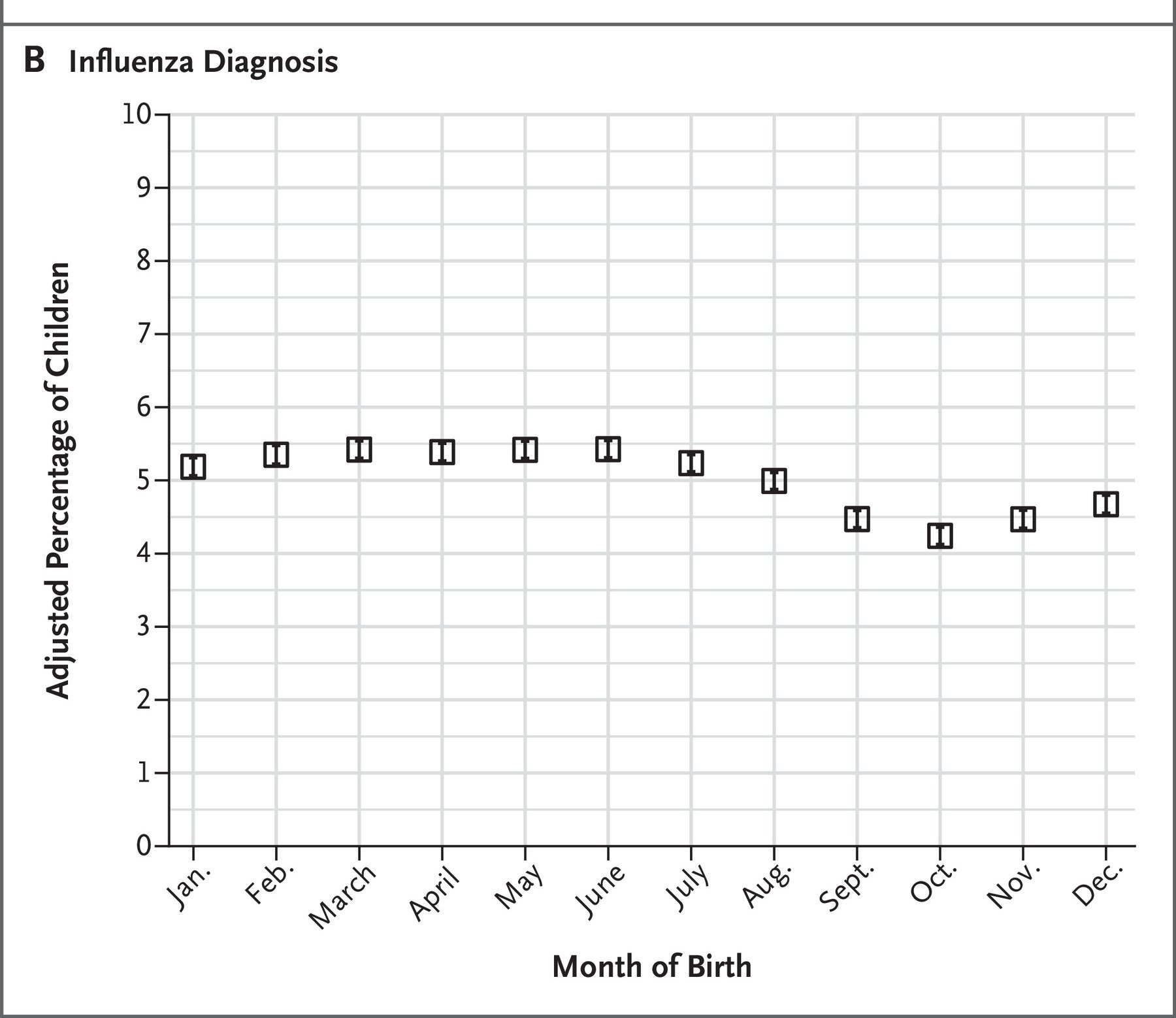 The difference may not be huge, but it's real.  Read the brief.  It's great.  But do PCC clients see the same results?

Ultimately, I decided to jump to the punchline.  I didn't slow down to look at rates of vaccination.  That data is much more difficult to figure out accurately, particularly for the flu shot.  But I can determine if there is an unequal distribution of flu diagnoses.

The results are...fascinating.  For those who missed it on the newly revamped Late Night With Paul and Chip webinar:

Broadly speaking, our data mimics the Harvard study, but with some interesting deviation.  As you can see, the peak flu rates based on birth month in PCC client patients are roughly February through April and the lowest rates are from August through November.

There are some interesting anomalies to dig into.  What happened in May, 2020?  COVID, that's what happened!  Kids were masking, isolated, and not spreading germs.  The Harvard work blended 2015-2017 data, so they wouldn't have picked up the COVID impact.  I can't explain the November, 2019 bump except to say that the 2019-2020 sick season was exceptional.

Certainly, this analysis is not as rigorous as the formal study, though I think there are some aspects to our sample which make it more compelling.  If someone were to dig into this further, I'd do this on a state level and use the claim data to estimate when the flu shot actually showed up in private practice.  As we know, that date can vary by 4+ weeks, which softens the understanding of the impact we're expecting here.

The podcast is worth a listen, though I take some real issue with where they were going with vaccine delivery.  I'd love to know how many independent pediatric practices weren't able to get the host a flu shot for his child - that seems inconceivable to me.  I suspect he was running into the same issue we all face: the pharmacies receive their doses weeks ahead of independent physicians, adding more chaos to the process.  I couldn't agree more that the flu shot delivery system is broken, but I do fear the impact on the Patient Centered Medical Home should we have pharmacies doing this work. [Not exactly where they were going in the podcast, but I know that's what the pharmacies would have concluded.]