2009 has been the year of billing service pain.  Right now, Igor and I are talking to no fewer than five pediatric practices who are suffering at the hands of bad billing services.  Here are some of the things I've seen and heard recently:

Why are so many practices willing to sign control of their money and success over to entities who have less and less interest in doing what you expect? Lately, I've asked each of these practices for a definitely list of exactly what services the billing service is expected to provide (who posts what, how much followup is done, etc.) and not one of the practices even really knows!

I have a theory for why things have gotten so bad.  Here's a graph of what I see happening: 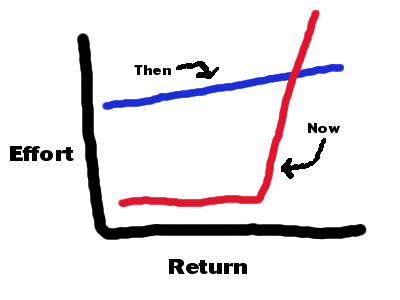 In the good ol' days, the billing services did a lot of work.  All those paper forms had to be filled out and filled out differently.  And followup was tough, but families understood the billing process.  So, the initial amount of effort the billing service needed to collect money was significant.  Followup was not really much more difficult relative to the other work, so it was completed relatively well.

Now, however, with electronic claims making the initial dollars exponentially easier to collect and the HMO mess making that last 10-20% of the dollars a lot more difficult to collect (think: high deductibles, secondary insurance, etc.), the billing services are much more focused on the easy work.  Who can blame them?

This leads me to the conclusion that there is a real place in the market for a pediatric specific billing service, one that tracks down money as though it was their own.  Hmmm...

And here's an idea that at least two other vendors have caught on to: if you go out and BUY a billing service, you can lock those users into using your EHR!  Think about it - you're getting paid crazy money already to submit claims (6-10%!) and their contract with you means they can't leave even if they want to.  So, they need an EHR...you simply tell them that it's your way or no way.

I know of two practices who are in this position right now, if you think it can't happen.