The other day, I posted our new Sick:Well visit benchmarks that take into account the -25 modifier usage.  I remarked that there appeared to be an interesting dip in the benchmark in 2004 and asked if anyone had an explanation.

Turns out that Chipsblog Super Fan (my label) Dr. Suzanne Berman did a little research in her practice and may have come up with some of the answer.  At first, she wrote to me:

I betcha one reason is because the 2003/2004 flu season was so screwy and awful. We recall it in our practice annals as the Awful Influenza Year -- influenza vaccine was delayed, no one paid for FluMist yet, the vaccine was a mismatch, and worst of all, the season hit way early (November), before we were prepared for it. This would push a lot of kids that you'd normally see in early 2004 to late 2003, making the 2003 ratio higher and the 2004 ratio lower.

She then confirmed that her S:W ratio dropped quickly in 2004 and jumped up slightly in 2005.  She ran off to test her hypothesis and came back with this beauty... 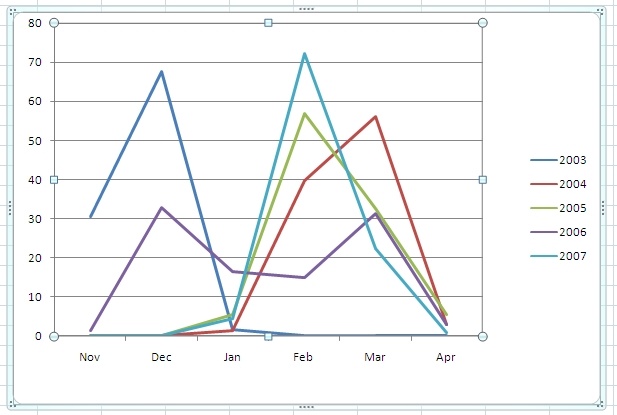 Sure enough, 2003 came a few months early, pushing a stack of kids who would have otherwise shown up sick in 2004 back into 2003. She then pointed me to this cool CDC flu site showing that a similar trend was felt across the country, saving me from having to run the data for our clients...

Here's the kicker - Dr. Berman realized that this trend above would only really affect the ratio if flu diagnoses make up a significant portion of sick visits on an annual basis.  Turns out, at least in her office, the flu shift that year was part of the cause - but not all of it.  Was the super-late arrival of the 2004 flu mean that you didn't actually see all the sick kids you'd normally see, as you were already into your well schedule/season?

Anyone else?  This is great stuff.  Thanks, Dr. Berman.